Tale of the tape: Breaking down the Cowboys week two victory of the Washington Redskins 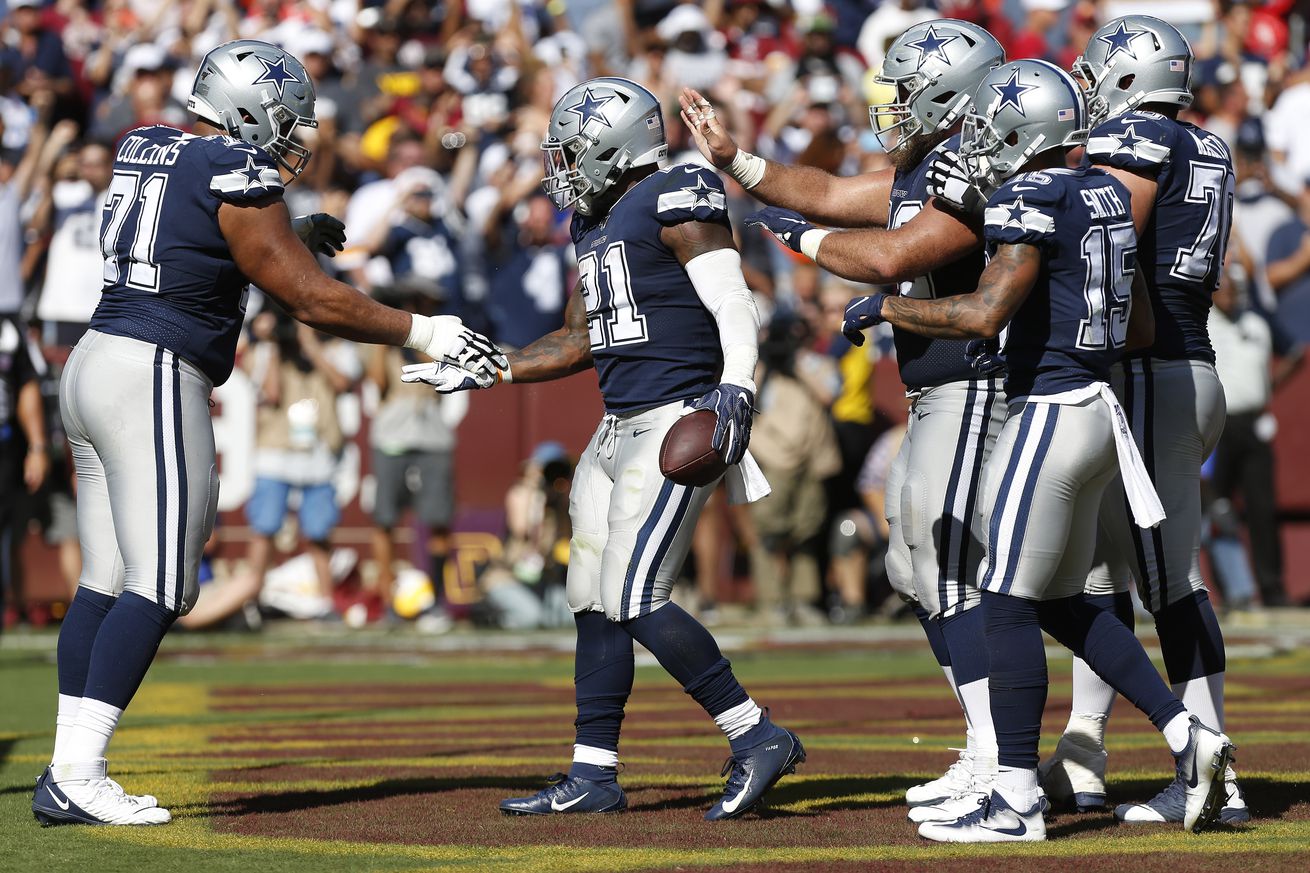 What did the tape tell us about the Cowboy week two victory?

Another week, another victory for the Dallas Cowboys against a division rival. The Cowboys pulled off a 31-21 victory on the road in Washington after a slow start on the road. While the offensive had another good showing, the defense had an improved showing as well shutting down the Washington run game.

Let’s take a look at the All-22, to see some of the Cowboys best and worst plays from their victory.

Maliek Collins best play of the season so far. Collins was too quick for Scherff pic.twitter.com/ZKl2CCvZSE

While the Cowboys defensive line struggled to get consistent pressure on Case Keenum in week two, Maliek Collins flashed on multiple occasion. Here, he’s just too quick for the center attempting to down-block. Collins knifes through the interior of the offensive line for a big tackle for loss to set the tone early for the Cowboys defense. DeMarcus Lawrence was also in great position on this play, after stacking and shedding RT Morgan Moses.

Hell of a rush from Ezekiel Elliott to remained balance through contact to pick up a nice chunk of yardage on the inside-zone read. pic.twitter.com/vKqv1fF5bN

Ezekiel Elliott is off to his hottest start of his young career. Runs just like this is one of the many reasons why the Cowboys made Elliott the richest running back in NFL history just a few weeks ago. Elliott takes the handoff on the inside zone-read, sticks his foot in the ground to find a cut-back lane, and is able to take 265-lb Ryan Kerrigan for a ride. The contact balance, low center of gravity, and change of direction skills Elliott runs with here in very impressive. Along with the impressive run, I love the physical hit Elliott puts on Monte Nicholson, who is attempting to step up and make a tackle.

Payne beats Williams with a club-swim. How Dak gets way from Payne here is impressive, because he wanted to hit Cobb right away on the quick slant coming out of the bunch

Sure looks like Dak expected to Cobb to release into his route right off the LOS, but Cobb took a bit longer pic.twitter.com/5LUlxCd7Yj

Here's the sideline view. When Dak hitches, Cobb is just getting out of his break, and at that same time Payne is at the QB already. pic.twitter.com/mAZWD2I4Dc

A lot of talk was made about who was at fault for the Dak Prescott interception in the first quarter. We could chalk this one up to multiple players. To start, Connor Williams was absolutely cooked by Da’Ron Payne, who used a club-swim move to beat Williams with his initial rush. Once in the backfield, Prescott does an incredible job of avoiding to sack, and keeping his eyes down the field. Prescott is unable to set his feet though, and delivers an inaccurate ball to Randall Cobb who is coming free across the middle of the field. With Cobb open, Dak’s pass is behind Cobb, which is deflected into the air for an easy interception. Cobb would tell you he has to have this, Dak would tell you he has to deliver a more accurate football, and Connor Williams would tell you he can’t be beaten that quickly.

Dallas catches a break on this play. Keenum leaves a relatively clean pocket way too early and misses his TE running free up the seam at the top of the screen. pic.twitter.com/dLyBZozfHo

The Cowboys defense had a better performance in week two, but it still wasn’t great, and they still caught some breaks. A great quarterback stands in the pocket, and hits the tight end running up the seam on this play. Instead, Keenum leaves a clean pocket, takes away one half of the field, and ends up checking to football down to a covered receiver. When the Cowboys get into the tough part of their schedule, they will need to clean some of these issues up.

Linebackers come crashing off the play-fake, Dak gets to the final step of his drop, hitch, delivers a beautiful ball for Devin Smith.

Dak absolutely took over on this drive and was dead nuts for the remainder of the game. pic.twitter.com/zXWP1u4GtY

Not every throw has to be a tight-window throw for it to be impressive. Here, Dak is just right on time with everything. When Prescott hits the final step of his drop, he already knows where the football is going. A slight hitch, step up in the pocket, and an absolute dime to Devin Smith off the play-fake. Prescott, minus the one or two minor mistakes, was absolutely perfect in week two with his decision making, timing, and accuracy in all three levels of the field.

This one's on Dak.

Gotta rip this one. pic.twitter.com/RgejwnShro

This was one of Dak’s few mistakes against the Redskins. In the only sack of the game, Prescott had two receivers open for the first down. While some of the fault can be chalked up to the offensive line, Prescott has to let this one fly to Amari Cooper at the bottom of the screen for the easy first-down completion. Dak also had his slot receiver at the top of the screen coming free up the seam, but the pressure wouldn’t have allowed him to get this football out to the slot receiver. Even in an excellent performance, there are still a few minor things Prescott can clean up.

Dak made a great read on this one. Norman's positioning gives Gallup outside leverage, and Dak see's it. pic.twitter.com/KYktLtwTzx

This play was another big talking point the morning after the Cowboys win. Many thought that Dak threw an inaccurate ball to Gallup on this play, but that is not the case. Reading Norman’s coverage, Dak made the right read on this play, throwing the football on Gallup’s outside shoulder, with Norman having perfect inside leverage. On the last step of his drop, Dak sees Norman playing off, and inside which gives him a perfect window to fit the ball in on Gallup’s outside shoulder. Gallup, being a young receiver likely didn’t notice the space Norman was giving, and didn’t change his route direction to account for Norman’s positioning. This is something Dak and Gallup likely talked about right after, and in the film room on Monday.

.@TankLawrence was tremendous on Sunday. Just missed 2-3 sacks, forced multiple incompletions and erratic throws due to his pressure.

While the numbers may not say so, DeMarcus Lawrence has been tremendous so far this season. Here, he beats Morgan Moses with a euro-step cross-chop to get to Case Keenum to force what should have been a pick-six. Lawrence can win with so many different moves, and will continue to be a terror to block week in, and week out.

The Dallas Cowboys will look to head to 3-0 on the season as the Miami Dolphins come to Arlington. The Dolphins, coming off a historically bad start to the year will need to play much better than they have if they want a chance in this game. The Cowboys shouldn’t take them lightly though, and should come out and dominate this game from the first whistle. All signs so far point to them doing just that.

Around the NFL (Week 3): How the rest of the league is doing in the early season

The Times and Kavanaugh, a Mysterious Trump Scoop, and Covering Eli Manning